Imam Ahmad Ibn Hanbal (may Allah have mercy on him), at the peak of his life, was the most famous man in the Muslim Ummah during that period of time. Hands down. He was the most famous. How do we know this? Well, Imam Az-Zahabi (may Allah have mercy on him) said that when Imam Ahmad died, he had the one of the largest Janazah (funeral), if not the largest.

Like many Muslims, he died and he was buried on the same day. This is, of course, highly recommended for all Muslims. However, guess how many people came to pray Janazah on him? 1.3 million was the modest estimate. SubhaanAllah. That’s more than the Pope John Paul’s funeral. Even with all the media coverage. So anyways, you can imagine how popular and beloved Imam Ahmad was, back then. Masha Allah TabarakAllah. Allahumma baarik feeh. O Allah, bless him.

Imam Ahmad was someone who liked to learn from others. He learned not only valuable Islamic knowledge, but also akhlaaq (attitude, behaviour, character and mannerisms), teaching techniques and other useful ideas and strategies as well. He learned from the young and the old. He learned from the teachers and the students. In fact, he used to go around his own students’ Halaqahs, wrapping his face so that no one would know it was him. He didn’t mind. He just wanted to keep learning from others, even from his own students. He knew that if any of his students knew that he was present in their Halaqahs, they would immediately stop. They wouldn’t be able to continue to teach, out of humbleness, out of humility for him. They had such a high regard for him that they wouldn’t be able to bring themselves to teach if they knew that he was present in their audience or class. They would simply be too shy to teach. He was just too great a scholar.

Well, Imam Ahmad thought he was basically a normal person. He didn’t like publicity. He was a very humble person. He didn’t want people to put him on a pedestal. He was just a simple teacher and a student as well.

Let’s hear one of the stories regarding Imam Ahmad, shall we?

One day, the famous Imam Ahmad was travelling to Ash-Shaam (an area which is the combination of Syria, Palestine, Lebanon & Jordan today). Back then, they did not have Facebook, YouTube, Instagram, Twitter or other social media apps. Therefore, not many people would know how famous people looked like. Even though their names were famous throughout the lands.

So, on the way to Shaam, Imam Ahmad became very tired and it was getting really late. Imam Ahmed walked into a Masjid, thinking that he could perhaps spend the night there. He laid his head down, closed his eyes and stretched his body on a mat in a dark part of the masjid. He started to fall asleep. Suddenly, after some minutes have passed, the Masjid’s security guard woke him up abruptly. “Wake up! You can’t spend the night here. Get out. This is a Masjid. Not a hotel. Get out. I’m closing the Masjid.”

Imam Ahmad begged, “But… I have nowhere to go, sir. I don’t know where to go. I’m a traveller.”

“Get out!” yelled the guard.

Now, Imam Ahmad didn’t just sit there and say, “By the way, I’m Imam Ahmad.” He didn’t want to play that card! Imam Ahmad had never chosen to use his fame to his advantage. And he wasn’t going to start now. His fame was not going to secure him a place to sleep.

So, after being woken up suddenly by the rude guard, Imam Ahmad was, of course, in a little bit of a daze and rubbed his eyes. His body was tired and he needed some rest. He moved a bit slower than expected.

The guard sternly repeated, “Just get out!”

Imam Ahmad gathered his things a little bit faster this time and stepped out of the Masjid. He then settled onto one of the steps outside the Masjid and decided to sleep on the step instead. This should be alright, he thought.

Several minutes later, he was awakened by someone again. It was the same guard.

“Hey! Move! Go! You cannot sleep here! Not even the steps. Go! Move away!”

The big-sized security guard, not knowing who he was “messing” with, got really angry. He picked Imam Ahmad by his legs and he dragged Imam Ahmad to the middle of the street and dropped him there!

Imam Ahmad was shocked! But he did not get angry. He must have thought, “Oh wow. SubhaanAllah. But, Khayr. It’s OK. It’s fine. It’s all good, in shaa Allah.” He gathered his things, pick himself up and rubbed the dust, dirt, hay and leaves off his clothes.

Opposite the mosque, right across the street, was a bakery. The baker who owned the bakery had seen what had happened. He took pity on Imam Ahmad. He shook his head, walked towards Imam Ahmad and patted Imam Ahmad on the shoulder.

“Brother, come, come. You can sleep in my bakery. Don’t worry about the guard. Tonight, I’m going to be doing some extra overtime work. You can come sleep here.”

He hurriedly opened his bakery door and guided Imam Ahmad to a small corner inside the bakery and gave him a clean thick rug to sleep on.

While lying down, Imam Ahmad observed silently as the baker did his work. The baker at first sat down to put some ingredients together. Then he stood up, kneaded the dough, cut the dough into different shapes, carried some sacks of flour down from the shelves, scooped some measured flour into bowls and placed some flattened dough in the oven. Later, he sat down again to do some other tasks. Up and down, left and right this baker went. He was like a well-oiled machine.

And during everything thing that the baker did, his mouth was busy doing dhikr. One can hear him whispering “SubhaanAllah. Alhamdulillah. Laa ilaaha illa Allah. Allahu akbar.”

Every single task that he undertook . He didn’t stop doing dhikr. The entire night. Not only were his hands and legs busy. His mouth was busy as well.

Usually, people would get tired after saying dhikr after several minutes. But certainly not this baker! Masha Allah. TabarakAllah! Imam Ahmad was truly impressed.

The baker was of course too busy to notice that Imam Ahmad was not sleeping but instead, he was watching him closely.

(SubhaanAllah. There was no background music or news from the radio to entertain or accompany the baker when he is doing his job. Not even Nasheed. I don’t think radios were even invented yet back then!

You know how it is. These days, some workers (or even mums, dads, students and kids) are known to listen to music while they do their driving, chores, work, or even homework and studying!

But, look at this baker. He was so focussed. Dhikr was on his tongue all night long. SubhaanAllah.)

In the morning, Imam Ahmad could not help but ask the baker, “My dear brother. Tell me. How long have you been in this situation?”

The baker was puzzled, “What situation?”

“You know… How long have you been making Tasbeeh, Tahmeed, Tahleel and Takbeer to Allah while doing your work?”

“My whole life. This is what I do. I do this every day. Doesn’t everyone?” the baker replied, looking clueless. He didn’t know it was a big deal.

Imam Ahmad was, as usual, inquisitive. “So what has Allah done for you so far? Surely all these dhikr must have made Allah pleased with you. Surely Allah must have given you something. Please tell me, brother.”

Imam Ahmad knew that this baker is bound for Jannah, in shaa Allah. According to a hadeeth, Prophet Muhammad (s.a.w.) said that a single Tasbeeh, Tahmeed, Tahleel and Takbeer would earn the reciter a tree in Jannah, if said in one go. So, just imagine how many trees has the baker already planted in Jannah?

Imam Ahmad cannot imagine what the status of this man is with Allah (s.w.t.). Imam Ahmad was interested to know more.

“Well,” the baker answered, “actually, I never made a du’aa to Allah that Allah did not fulfil. All my duáas have been answered by Allah (s.w.t.). Everything that I asked Allah, Allah will give me what I asked Him for.”

“SubhaanAllah!” Imam Ahmad was impressed. He repeated, “You never made a du’aa except that Allah gave it to you?”

“Yes. I never made duáa except that Allah gave it to me…. Well….Hmmm… except for one duáa though.”

Imam Ahmad wondered, “So, what was that du’aa that Allah has not fulfilled for you yet?”

“Well, I haven’t been given the opportunity to meet Imam Ahmad. I’ve heard so much about Imam Ahmad. I love him for the sake of Allah. I heard many good things about him. He is a great teacher and role model. I would love to meet him someday, in shaa Allah.”

Imam Ahmad was brought to tears. He embraced the baker at once!

“SubhaanAllah. Here, Allah has brought to you, my dear baker brother, this Ahmad. Dragging this Ahmad by his feet to your humble bakery. If it wasn’t for you, this Ahmad could have slept in peace at the Masjid!”

Imam Ahmad was beyond amazed.

Dear reader. Are you as blown away as I am right now?

Let’s keep it simple. Let’s try do a little bit of simple dhikr that we can manage in our daily life. Surely you and I can do at least just that little bit?

Get some ideas from this following article, in shaa Allah…

The above story has been edited, adapted and enhanced from the video clip below.

5 thoughts on “The Baker’s Duáa”

This site uses Akismet to reduce spam. Learn how your comment data is processed. 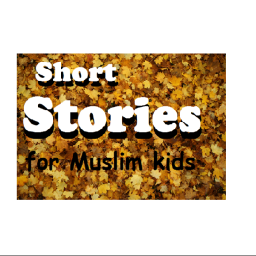 Welcome to a Halal website featuring short stories for Muslim kids and their families.

Other Islamic Websites with stories to tell